Chancery Contracts have recently been in the news with this article taken from the Wolverhampton West Magazine.

The technology has been around for years, but it has successfully crept under the radar of our domestic lives. Alongside smart phones and a generation of smart watches, we now have the technical evolution of smart houses. But for millions juggling the time-taxing duties of domestic servitude, the benefits of intelligently automated living still remains one of lifestyle’s best-kept secrets.

Geeky, futuristic, impractical and just too expensive? Surprisingly not!

JOHN NASH unpacks the facts and meets the technophobe businesswoman whose hectic life has been transformed after having this clever Wi-Fi gadgetry installed in her home.

The Present Reality of Living in a ‘Sci-Fi’ Home 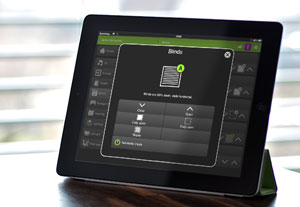 Homes that think for us have for years been the backdrop of science fiction films and a staple diet of World Fairs and the Ideal Home Show.

Perceived as being beyond reach, they have for many property owners remained a futuristic frontier.

But now a growing number of people who wish to reimagine daily interaction with their homes are embracing the ‘future’ and enjoyinga present reality of integrated living.

Their smart homes are often ordinary domestic builds – semi-detached, detached and occasionally grandiose – where occupants have undergone nothing short of a major lifestyle shift for the better.

For technophobe Lisa Pitt that transformation appears to have been a remarkably liberating one. Lisa, who lives in a secluded Shropshire hamlet, is New Business Manager of Financial Services for one of the largest retail chains in the UK and a convert to smart home living. She’s also a self-confessed Luddite with a deep-rooted, irrational distrust of all things digital.

The premise that she would ever have the conviction to use an app on her mobile devices to control heating, lighting and security while being away from her house was not only unlikely, but also bordering on ludicrous.

“You can’t imagine just how bad I am. I’m the one with a calculator hidden in the handbag. When my partner suggested that we should consider having these devices, I said: ‘What! Me?”

Lisa adds: “It’s been three years since I had the first install and I was shocked just how easily I took to it. The beauty with the technology in my home is that it can grow with you. It’s modular.

“Initially I just had the lights linked up. I wanted the additional security of being able to come home late and have the house looking like someone was actually there. I also have teenagers, who’d leave every light switched on in the house and being able to instantly review that while I’m away is essential, as well as being cost effective.”

After ten minutes of exalting the benefits of “managing everything remotely or centrally,” the 48-year-old is enthusing with an almost evangelical zeal about living with intelligent automation.

“Especially in the winter… I now come home and the place is always warm, welcoming and my music’s playing, even if no-one’s around.”

The technology by Loxone offers easy upgrades – an opportunity too good to pass for this convert. Frustrated there was never enough hot water to indulge in a bath after returning late from business meetings, Lisa commissioned an add-on for the heating.

“On the way home I can just turn it on. This technology changes the way we live for the better,” she says. Other additions have included lightsenstive window blinds, a multi-room music system, garden lighting, security cameras and alarms.

And how user-friendly is the system? “My nephew, aged seven, can operate it and so can mum and dad, both in their 80s, with the touch of a button,” adds Lisa.

The installation was carried out by Chancery Contracts Ltd of Trysull Road, Merry Hill, Wolverhampton. On the cutting edge of electronic installs, the company has more than 20 years’ experience in the industry, Managing Director David Lewis says: “We are a Gold Partner with smart home technology suppliers Loxone and their domestic servers are excellent. In the three years we’ve been fitting them we have never had a failure.

see the full article at: www.wolverhamptonwestmag.co.uk

If you would like more information about how to get started with your smarthome installation and plan the roll out, please get in touch for an initial no obligation discussion.