At the start of 2015, Chancery Contracts were approached by the Rapunzel Salon in Wolverhampton to improve their lighting levels, give the salon a more glamorous look and, if possible, make savings on running costs. They also wanted the shop to be more noticeable in the evening as it is a busy street with lots of potential new customers in the passing traffic.

To begin with, we installed recessed LED spot lights on each side of the shop to create a 'waterfall' effect down the walls. Previously the salon had a few diachronic spot 50 Watt lights and were having to change up to 2 per month. We changed this setup to use 5 Watt LED lamps which now emit more light, but with significantly lower power costs and a greatly extended operating life - so removing the need for the monthly lamp replacements. 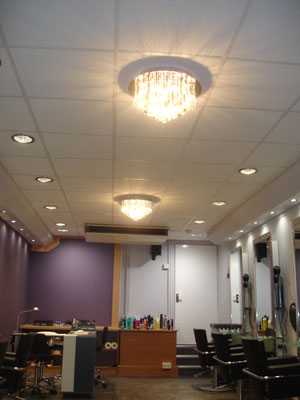 Above each hair station we installed a recessed LED fitting with a chrome bezel. This had the double benefit of making the salon look much more glamorous while greatly increasing the light available to the hair stylist to work under. With an output of more than 2000 lumens the stylist's work station is now very well lit, but to make sure the light was not too stark, or clinical, we also choose a warmer colour lamp to assist when colouring the hair. This removed the risk associated with the full cool white of some LED lamps that can drain all the colour out of the the lit area somewhat, which would have prevented the client from seeing the full effect, or true colour, of the styling work.

Down the centre of the working areas in the salon two chandeliers were installed to add to the overall glamorous impression. The chandeliers created an interesting feature on the ceiling, breaking a view dominated by the recessed bright lights that risked making it look more like a chemist than a hair salon. Additionally, they also had a third, larger, chandelier fitted in the main entrance as a feature which further enhanced the glamorous look.

To help the saloon get noticed in the evening new LED lights were installed in the window together with an illuminated LED light post to highlight the existing sign. This time we went for the cooler LED light colour to achieve a strong attention grabbing effect. The window lights and sign were installed on a time clock so the salon could take advantage of the evening passing traffic, but not incur the cost of having the lights running all night. 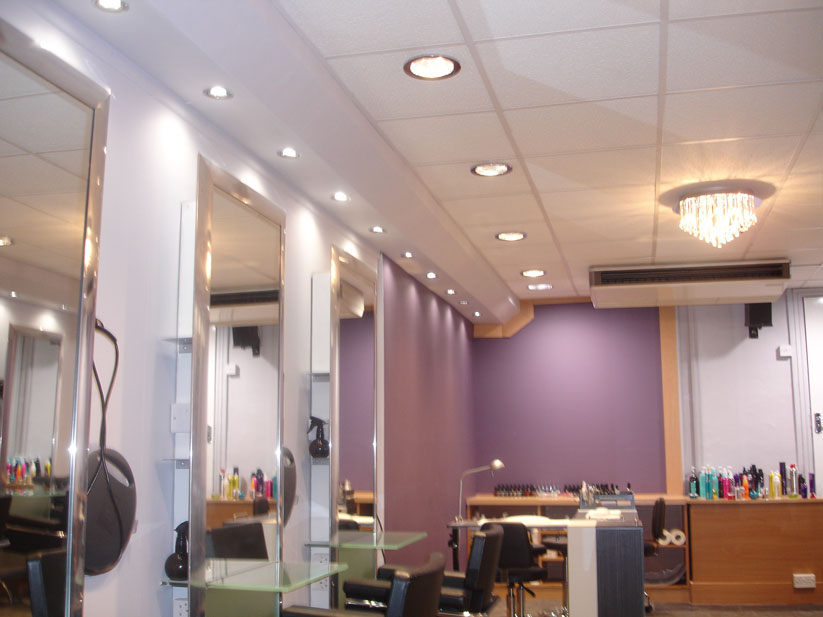 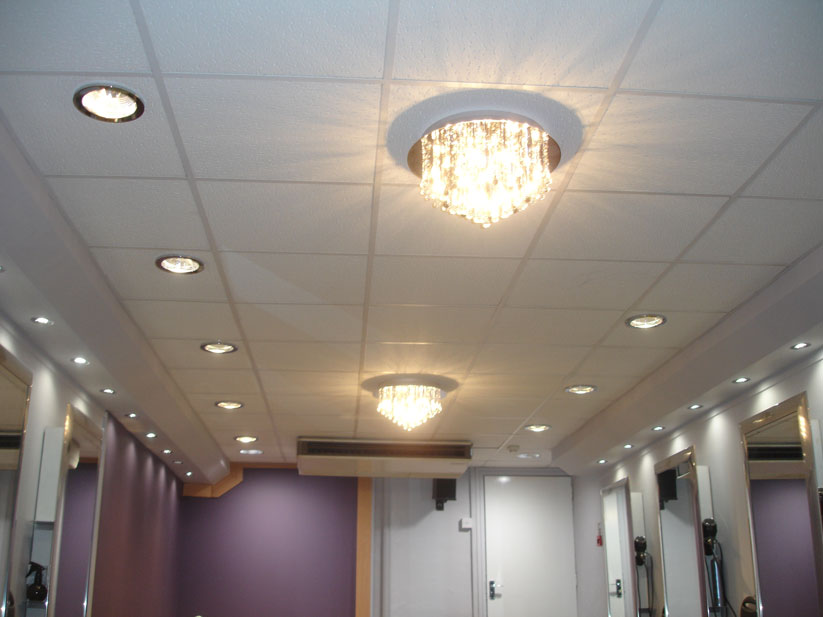 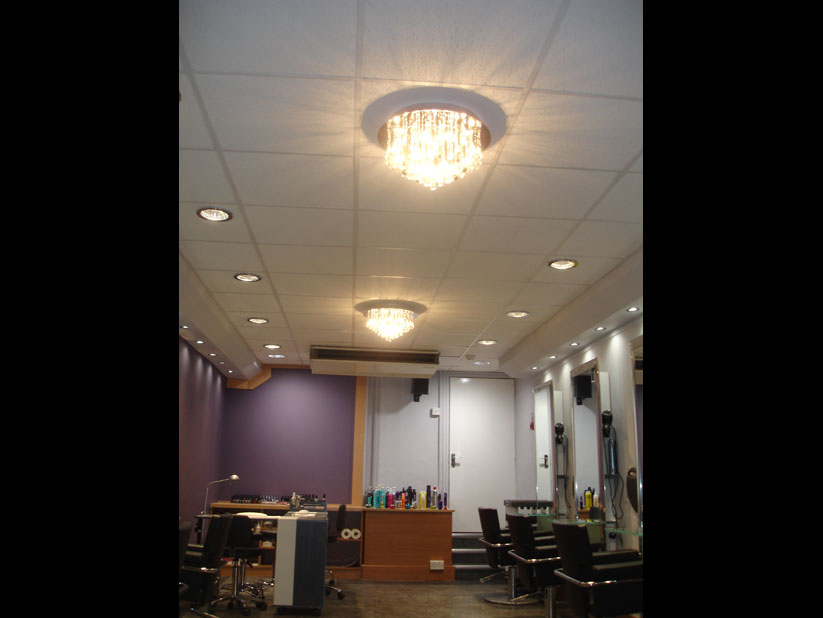 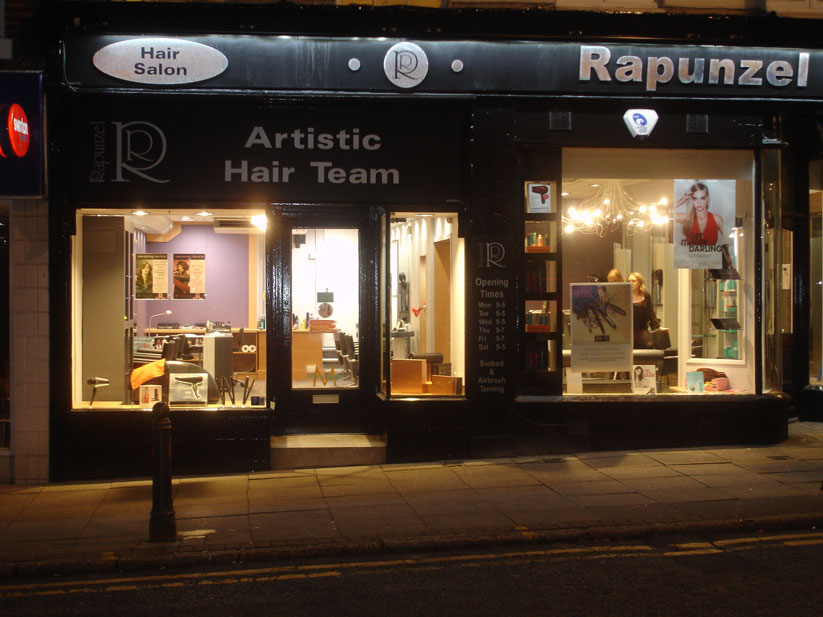 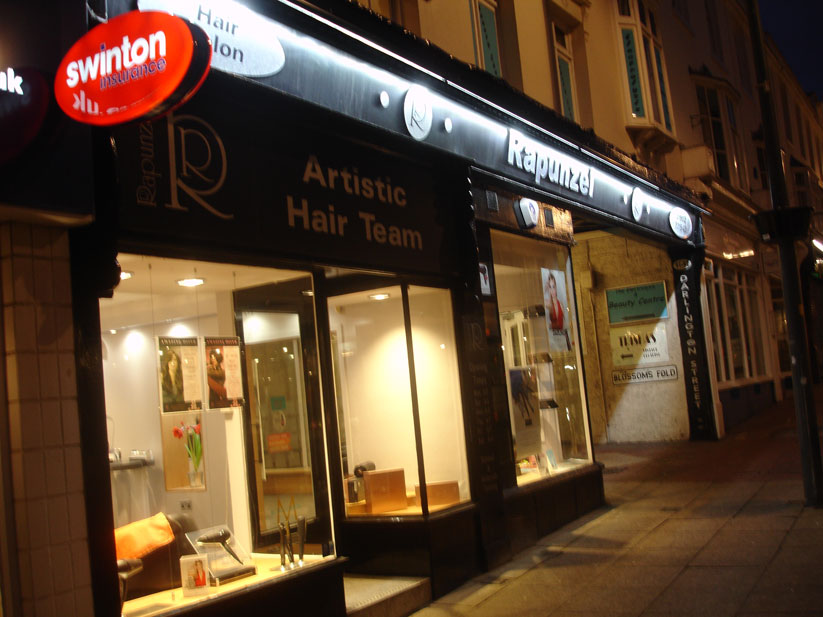 Chancery Contracts works with both national chains and independent retailers on new builds, or on re-fits. If you would like to know more about our lighting installation and design services for retail then please get in touch.